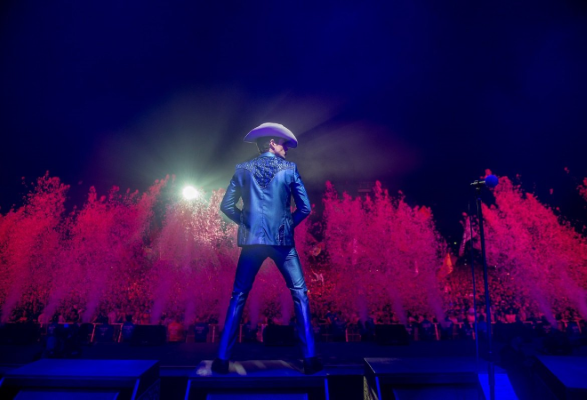 The Killers have rescheduled their Imploding The Mirage Stadium Tour and will be heading to the UK and Ireland in 2022, with special guests Blossoms, Sam Fender, Manic Street Preachers and Supergrass.

EXTRA STANDING TICKETS released for headline show at the Eco-Power Stadium, Doncaster on 24 May 2022, tickets on sale now from Ticketmaster See Tickets

JUST ANNOUNCED>> The Killers to play intimate warm-up show at the O2 Academy, Sheffield on 17 May 2022, tickets on sale Thursday (14 April) at 10am from Ticketmaster

The tour will be in support of their sixth studio album ‘Imploding The Mirage’.

The Killers commented, “UK and Ireland friends… We’re sorry, but there’s no way around this. These will be the same great shows, but we have to move them to next year. All tickets will be honored, so we really hope you can still join us!”

Since dropping their 2004 debut album ‘Hot Fuss’ featuring breakthrough singles ‘Mr Brightside’ and ‘Somebody Told Me’, the Las Vegas rockers have sold an incredible 28 million albums.

Their 2006 follow-up ‘Sam’s Town’ included further hit tracks like ‘When You Were Young’ and ‘Read My Mind’. The Killers third studio album ‘Day & Age’ received widespread critical acclaim in 2008, as did lead single ‘Human’.

In 2012 they unveiled ‘Battle Born’ followed by 2017s ‘Wonderful Wonderful’ LP, which saw the group achieve a record-breaking fifth consecutive UK No.1 album and reach top the US chart for the first time.

In 2019 the band released stand-alone track ‘Land Of The Free’ along with an accompanying Spike Lee directed video. They then went on to headline Glastonbury Festival for a second time, playing a spectacular set of hits with Pet Shop Boys and Johnny Marr joining them on stage for an unforgettable encore.