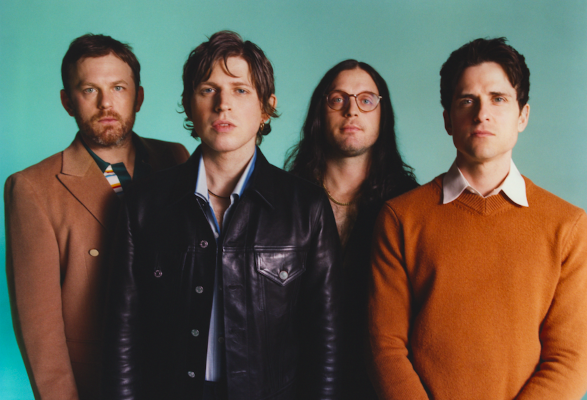 Kings of Leon have revealed the music video for new track ‘Echoing’, taken from their hugely anticipated eighth studio album ‘When You See Yourself’, due out on 05 March 2021.

The visual mirrors the song’s energy through dynamic black and white imagery – WATCH IT HERE:

‘Echoing’ follows lead single ‘The Bandit’, which was also shared alongside an accompanying music video, as well as second track ‘100,000 People’.

WATCH THE VIDEO FOR ‘THE BANDIT’ HERE:

The new album, recorded at Nashville’s famed Blackbird Studios and produced by Grammy Award-winning Markus Dravs, looks set to propel the band into 2021 with a modern evolution of their sound.

The Tennessee rockers first took to their social media earlier this year to unveil samples of new tracks ‘Must Catch The Bandit’ and ‘Feel The Way You Do’, alongside short black-and-white video clips featuring the group. In addition, they revealed previews of two further tracks ‘Dancing In Your Head’ and ‘Spin It Like We Can’.

Kings of Leon’s last new music dropped back in late March 2020 in the form of track ‘Going Nowhere’, which was accompanied by a black-and-white music video.

The multi-platinum selling group has had five singles on the Billboard Hot 100 chart, with all seven of their studio albums making the Billboard’s Top 200 list. Following the release of ‘WALLS’, they achieved their first-ever No.1 album debut on the Billboard Top 200.

‘When You See Yourself’ Full Album Tracklisting:

When You See Yourself, Are You Far Away
The Bandit
100,000 People
Stormy Weather
A Wave
Golden Restless Age
Time in Disguise
Supermarket
Claire and Eddie
Echoing
Fairytale