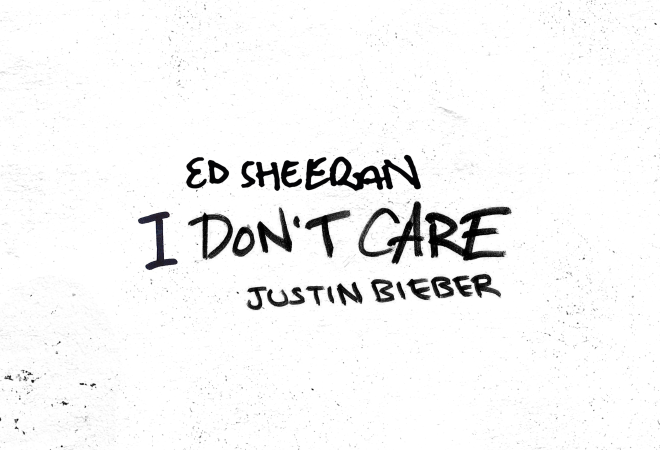 Ed Sheeran and Justin Bieber have teamed up again, this time on catchy single ‘I Don’t Care’.

After teasing the new track, the pair have dropped an official lyric video for the song, which focuses on relationships. Sheeran took to social media saying, “Me and @justinbieber have got a new song out. It’s called “I Don’t Care”, I hope you like it x”

‘I Don’t Care’ is produced by Max Martin, Shellback and FRED.

CHECK OUT THE LYRIC VIDEO HERE:

Sheeran and Bieber previously joined musical forces back in 2015 for hit single ‘Love Yourself’, which Ed had originally penned for his own album before passing it on.

‘I Don’t Care’ sees both artists pay tribute to the special ladies in their lives. Sheeran sings about childhood sweetheart Cherry Seaborn, who he reportedly wed in February, whilst Bieber dedicates his parts to wife Hailey Baldwin.

Ed Sheeran’s last solo album release was 2017’s ÷ (Divide). His record-breaking world tour saw him end 2018 with the highest-grossing tour of the last 30 years. The pop icon is set to return to the UK this summer with further shows scheduled in Leeds and Ipswich.

Since dropping ‘Purpose’ back in 2015, Bieber has featured on a number of huge tracks, including the remix version of Luis Fonsi, Daddy Yankee’s ‘Despacito’ and ‘No Brainer’ with DJ Khaled, Quavo and Chance the Rapper. The pop star also recently joined Ariana Grande onstage at Coachella, igniting rumours that a fifth album could be on the way.

Only time will tell – until then, at least all the Sheerios and Beliebers out there have a brand new bop to sing along to!