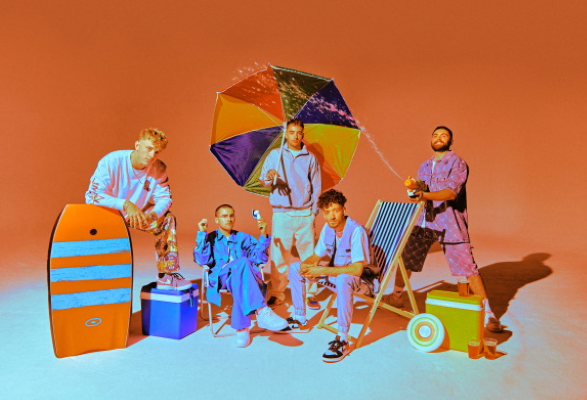 The track offers fans another taste of their highly-anticipated debut album ‘Life’s A Beach’, due out on 04 June 2021.

‘Skeletons’ received its first play on BBC Radio 1 as the Hottest Record in The World, with the band making their US TV debut in support of the song on Jimmy Kimmel Live!

The accompanying music video was directed by Jamie Whitby. Shot in a one take style in a world that becomes increasingly cagey, it features a once-seen-not-forgotten shot of frontman Murray Matravers riding a haunted horse amongst a cast of giant skeletons, bewildered locals and fellow bandmates Cass, Lewis, Sam and Jordan.

‘Skeletons’ follows recent single ‘A Message To Myself’.

The stunning visuals for the track were directed by Andy Baker and produced by BEKON.

Murray shared a statement on social media about the track saying:

“a message to myself is a reminder to keep doing you and not be influenced by other people. life can seem pretty impossible from time to time but we all need to get better at listening to the positive voice in our heads, no matter how drowned out it may get by something negative

nobody can do you better; there is nobody else who can do you so please just be yourself

The Leicester band first gave fans a glimpse of the record in October last year, following the release of their acclaimed mixtape ‘Junk Food’ in January 2020.

In addition, the alt group recently announced that they’ll be hitting the road on tour in support of the new record this November – full details: