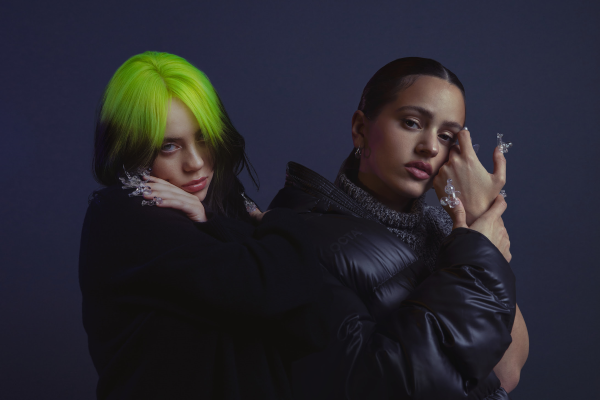 Billie Eilish and Rosalía have revealed their much-anticipated collaboration with accompanying music video, after teasing new track ‘Lo Vas A Olvidar’ on their social media.

The pair first hinted that they would be joining musical forces back in March 2019 when Rosalía shared a picture from the studio captioned with “can’t wait to finish our song”. The track is set to feature in a special episode of Euphoria.

Billie Eilish recently announced that she’ll be releasing a personal self-titled photo book with audio companion this May.

‘Lo Vas A Olvidar’ will follow latest single ‘Therefore I Am’, which the artist dropped back in November 2020. The visuals for the track were directed by the 18-year-old and filmed in a deserted shopping mall.

Last summer Billie Eilish unveiled single ‘My Future’ plus an official music video. The track was penned and recorded in Los Angeles during lockdown and produced by the global pop-sensation’s brother Finneas. It follows Billie’s hugely successful 2018 multi-Grammy Award-winning debut album ‘When We All Fall Asleep, Where Do We Go?’ as well as last year’s James Bond theme tune ‘No Time To Die’.

She commented, “We wrote this at the very beginning of quarantine. It’s a song that’s really really personal and special to me. When we wrote this song, it was exactly where my head was at – hopeful, excited and a craaaazy amount of self-reflection and self-growth. But recently it has also taken on a lot of new meaning in the context of what’s happening in the world now. iI hope you can all find meaning in it for yourselves.”

The animated visuals for ‘My Future’ were created by Australian artist Andrew Onorato.

Billie took home five Grammy Awards earlier this year, including for Best New Artist, Album of the Year, Record of the Year, Song of the Year and Best Pop Vocal Album. She and Finneas also delivered a special performance of The Beatles’ ‘Yesterday’ at the 92nd Oscars ceremony.

As well as securing her first No.1 single in the UK with ‘No Time To Die’, she won Best International Female at the BRIT Awards. The James Bond hit has since become the fastest selling single in the UK this year.

The “Where Do We Go?” full-length livestreamed concert took place last October and her highly anticipated R.J. Cutler directed documentary feature film “Billie Eilish: The World’s A Little Blurry” will premiere in theatres and on Apple TV+ in February 2021.

Billie Eilish was due to bring her sold out Where Do We Go?’ World Tour to UK shores in 2020, however all shows have now been postponed and will be rescheduled at a later date.