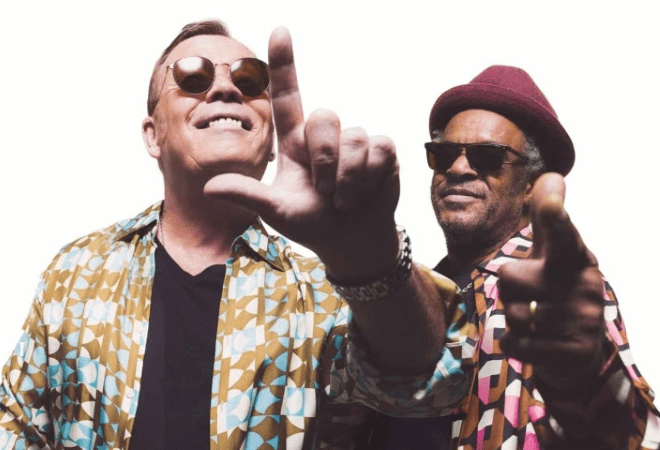 UB40 featuring Ali Campbell and Astro have released new charity single ‘Lean On Me’ in aid of NHS Charities Together.

The pair, who have recently been working hard in the studio, wanted to share their cover of the Bill Withers classic with all proceeds from the track going to the NHS Charities Together Urgent Covid-19 Appeal.

Ali Campbell commented, “Astro and I have really felt it was the track that encapsulated everything that’s going on at the moment, we’re all needing to lean on our NHS heroes. We wanted to make our contribution to this great cause; covering this song was the perfect way to show our appreciation.”

The Grammy and BRIT nominated UB40 have sold over 70 million records worldwide, making them the UK’s most successful reggae-pop band.

Ali and Astro previously demonstrated their support to the NHS back in 2018 when they joined forces with NHS singers and other stars, including the likes of Nile Rogers, Gabrielle, Guy Garvey, Seal and more to record ‘With A Little Help from My Friends’. The song was produced by BRIT-award winning producer Jon Cohen and released in celebration of the NHS 70th Anniversary as part of the NHS Voices.

Both artists have shared personal stories of the important role the NHS has played in their lives. At the age of 17, Ali received treatment from NHS doctors after an attack left him with a severe eye injury. Astro shared a powerful statement about how the NHS helped his mother and how he “can’t praise our wonderful NHS enough.”

“My incredible mother was diagnosed with leukaemia back in 2003 which was a blow to the whole family, but I’m happy to say she was successfully treated at the Heartlands & Queen Elizabeth hospitals in Birmingham! She sadly passed on 18th Dec 2013 aged 82. In my heart I know they gave her the best treatment possible, and I thank them for that! What made me realise what a different breed our doctors and nurses truly are was, as busy as they were, they’d still somehow find the time to have a chat with my mom, genuinely making her feel like she wasn’t there on her own and forgotten about. I know they didn’t have to, but they did, they’d go that extra mile. The same goes for care workers that helped her to convalesce, all that makes them so special! You can teach people to do almost anything, but you can’t teach people to care! Our NHS, they care.”

‘Lean On Me’ has fast become a heartfelt anthem for the NHS, with various artists joining forces to share their rendition of the song, including Beverley Knight and Joss Stone in aid of the NHS Relief campaign.

“I’m sure Bill Withers would have been happy to see his beautiful song put to such great use.” Ali