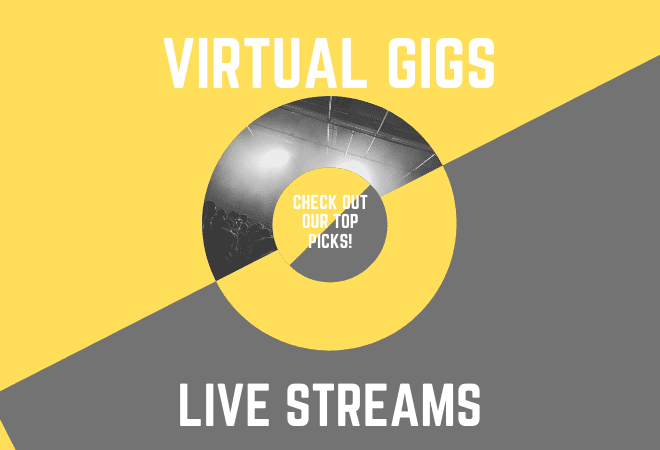 Missing live music? We’ve got the next best thing! Artists from around the globe are heading online to connect with their fans – read on for some of our top live streams, virtual music gigs and special digital events to tune into from the comfort of your own home.

Tinie to livestream 10 year anniversary show of his debut album ‘Disc-overy’ at the Royal Albert Hall, London on 16 April 2021, tickets on sale now from AXS

A Night In With Bridgerton Author Julia Quinn virtual event will take place on 07 February 2021, tickets on sale now from See Tickets

Sleeping Beauty Panto will be availble to stream until 11.55pm on 03 January 2021, tickets on sale now from Ticketmaster

The Darkness Lockdown Live: A Streaming Of A White Christmas virtual event will take place from Indigo at The O2, London on 18 December 2021, tickets on sale now from AXS

Melanie Martinez, the CAN’T WAIT TILL I’M OUT OF K-12 global streaming concert event will take place on 17 December 2020, tickets on sale now from Ticketmaster

Liam Gallagher – Down By The River Thames one-off MelodyVR virtual gig announced with a full band playing Oasis classics alongside solo hits on 05 December 2020, tickets on sale now from Ticketmaster

The Streets – None of Us Are Getting Out of This Live Alive Encore virtual event will take place on 02 December 2020, tickets on sale now from Ticketmaster

The Cribs to play livestream gig from The Cavern, Liverpool on 20 November 2020, tickets on sale now from here

The Vamps announce global livestream show from Hackney Round Chapel, London on 21 November 2020, tickets on sale now from Ticketmaster

All Killa No Filla virtual event live from the Monkey Barrel, Edinburgh on 31 October 2020, tickets on sale now from Ticketmaster

Nothing But Thieves – Live From the Warehouse virtual event will take place on 29 October 2020, tickets on sale now from Ticketmaster

ARCHITECTS to play very special live stream from the Royal Albert Hall, London on 21 November 2020, tickets on sale Friday (23 October) at 9am from here

Billie Eilish has announced the Where Do We Go? The Livestream on 24 October 2020, tickets on sale now from Ticketmaster

Kylie: Infinite Disco worldwide performance spectacular featuring new tracks plus some very special Kylie classics will be streamed on 07 November @ 8pm GMT, tickets on sale at 9am from here

Ezra Furman livestream concert announced from the Museum of Fine Arts, Boston on 01 November 2020, tickets on sale now from here

Simply Red to celebrate the 15th anniversary of the legendary Gran Teatro show in Cuba on Thursday 27 August on their YouTube channel.

Placebo Lost Tapes Summer Festival Lockdown Series – the band will premiere full festival performances from across their career this August/September on their YouTube channel.

Elton John will broadcast a classic concert series featuring weekly live shows from his archive starting Friday (03 July) @ 5pm BST on his YouTube channel – funds raised to go to the COVID-19 Fund for the his AIDS foundation.

Melanie C will headline a very special online event along with Cath Tydesley, DJ Carl Kennedy and the Manchester Survivors Choir to mark the anniversary of the Manchester Arena attack, hosted by United We Stream: Greater Manchester on Friday (22 May) @ 8pm.

Dermot Kennedy confirms very special one-off concert ‘Sound Waves‘, which will be live-streamed via YouTube on Wednesday (20 May) @ 9pm BST in support of the World Health Organisation Covid Response Fund.

Lewis Watson Work From Home FM – the daily radio show is live streamed via Twitch from 10am – 1pm.

Lewis Capaldi to celebrate the anniversary of his debut album ‘Divinely Uninspired To A Hellish Extent’ by playing a ticketed live stream acoustic set on Saturday (16 May) in support of CALM. Tickets are priced at £5 and on sale now from here

Alanis Morissette – You Live, You Learn: A Night With Alanis and Jagged Little Pill benefits the Actors Fund’s COVID-19 relief efforts. The stream will be live on Facebook & Youtube on Tuesday (19 May) @ 8pm EDT.

Lewis Capaldi confirms intimate VR live performance on Wednesday (13 May), which will also be simulcast on his Facebook Live page.

Due to this year’s Met Gala being postponed, Vogue will be hosting A Moment With The Met livestream event featuring a performance from Florence + the Machine plus Off-White designer Virgil Abloh will be hosting a DJ set. Check it out here at 11pm BST on Monday (04 May).

The Take That star Gary Barlow has kicked off his very own ‘Crooner Sessions‘ series, performing live duets over video call – so far special guests have included the likes of JLS, Rick Astley, Ronan Keating, Alfie Boe and Jack Savoretti.

Katherine Jenkins Saturday Night Concert is the perfect night-at-home live stream for fans of the Welsh mezzo-soprano to indulge in whilst social distancing.

Ren Harvieu has been hitting up Instagram live every Saturday at 6pm to talk all about her new album as well as perform and Q&As.

John Legend has been releasing music in quarantine as well as performing some of his favorite songs at home.

Ticketmaster’s Homecoming: At Home With… video series takes you inside the homes of music, comedy, theatre and sport stars to raise money for vital charities.

Relive some of the best Reading & Leeds Festival sets over the years on 28-30 August on BBC iPlayer including Billie Eilish, Muse, Red Hot Chili Peppers & more.

The Alternative Manchester Pride Festival 2020 – the digital event celebrating all things Pride will take place across various platforms on 29-31 August.

2000trees announce the 2000screens Festival featuring three days of exclusive content and sessions from bands from the 2020 lineup including Jimmy Eat World, Thrice and more on 09-11 July 2020.

The Glastonbury Experience will feature full sets, highlights plus more across BBC iplayer and YouTube on 25-29 June.

Global Citizen announce the #GlobalGoalUnite Concert premiering on 27 June with Coldplay, Miley Cyrus, Justin Bieber, Quavo, Shakira plus many more as part of their worldwide campaign to ensure Covid-19 treatment for everyone, everywhere.

Along with our friend @TheRock, we’re calling on world leaders to commit to the fight against COVID-19 during the #GlobalGoalUnite Concert, premiering on June 27.

Together we can ensure that everyone, everywhere has access to the treatment they need: https://t.co/cYJJ1zJHNZ pic.twitter.com/eZLH3vNjq8

Cambridge Rock Festival virtual event will be available for everyone to watch in HD for FREE on 18-21 June here.

Isle Of Wight Festival has teamed up with Absolute Radio for three days of live music across the festival weekend on 12–14 June 2020. Tune into Absolute Radio each night from 7pm BST to hear selected sets from the festival’s history.

Wireless Festival announce Wireless Connect in partnership with MelodyVR, a three-day virtual festival set for the same weekend the event was due to take place this year on 03-05 July 2020.

Five4Five – Enter Shikari, Don Broco & more have joined the line-up for the stay at home festival raising money for the NHS. The live Facebook broadcast will take place on the weekend of 15-16 May.

The Face – The 1975 Tribute Concert will feature friends of the band covering some classic tunes – tune in on Thursday (07 May) at 4pm.

The Call to Unite – Alanis Morissette, Josh Groban, Quincy Jones, Oprah & many more join the 24-hour star-studded global live stream event aimed to bring people together from all over the world.

Defected Records Virtual Festival 4.0 – Defected Records has been turning living rooms into dancefloors with its series of virtual festivals. Check out footage from all live streamed events here.

BTS announce online live stream concert: BANG BANG CON The Live to entertain the lockdown ARMY – the concert will be streamed on their social media channels and Weverse on 14 June at 10am BST.

Head to YouTube to watch The National’s 2019 fan-curated live performance at Pukkelpop Music Festival in Belgium.

Taylor Swift has confirmed that her live concert special will be heading to Disney+ this month – The City of Lover Concert filmed at L’Olympia Theater in Paris will arrive to the streaming platform on Monday (18 May).

OMD: Live From Your Sofa will feature a YouTube screening of never before seen footage from The Souvenir Tour in full taken at the London Eventim Hammersmith Apollo 2019 gig – tune in on Saturday (09 May) at 8pm here

The historic Sarah Brightman: In Concert at the Royal Albert Hall full performance will be streamed on Saturday (09 May) at 8apm via YouTube to raise funds for Covid-19 Charities.

The Rolling Stones six-part weekly streaming series ‘Extra Licks’ – each YouTube Premiere will stream the bonus features of six iconic concert films from throughout the legendary rockers career, including performances from the 1994 Voodoo Lounge Tour and the 2016 Latin America Ole! Tour.

Radiohead, Metallica and Pink Floyd have been streaming live gigs from their archives – check some of them out below:

Daniel Kitson the comedian is to release his 2009 Edinburgh Festival show The Interminable Suicide of Gregory Church online via a series of limited capacity screenings starting on Monday (18 May) @ 9pm, tickets will be £5 each and on sale Friday (15 May) at 12noon from here

Romesh Ranganathan’s Lockdown Chronicles – the comedian gives fans a look into lockdown life behind closed doors and responds to live comments and questions.

Mo Gilligan’s The Quarantine Games take place very Wednesday and Saturday at 9pm from Mo’s home, straight to yours – tune in for fun, games and the chance to win prizes.

The world-famous Comedy Store is hosting special online events and streaming special footage from their archives directly into the homes of comedy fans across the globe. The next The Comedy Store Live: Online evening is due to take place on Saturday 02 May at 8.30pm – tickets on sale now from Ticketmaster

The Shows Must Go On series screens a new musical every Friday! Next up is Andrew Lloyd Webber’s 50th birthday concert filmed live at the Royal Albert Hall, featuring hits from some of his most renowned productions.

#NationalTheatreAtHome allows you to enjoy world-class theatre online from the comfort of your own home.

Island Records is running the One Love Covid-19 Relief Auction to raise money for NHS Charities Together and Feeding America. Artists and friends of the label have donated one-of-a-kind lots to raise funds for relief efforts. Tony and Grammy Award-winning star Billy Porter will host the live event on 21 May on the Island Records YouTube channel.

Also be sure to keep a close eye on our Twitter feed for more virtual music gigs to watch.

Glastonbury 2021 cancelled due to COVID-19 pandemic.