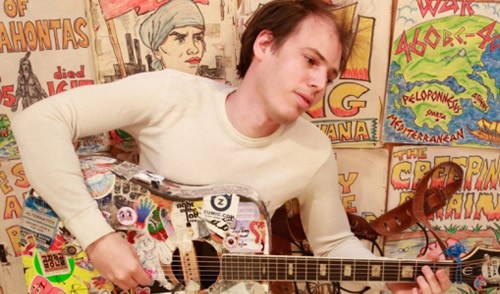 It was once said about one of Jeffrey Lewis’s heroes, Lou Reed, that he was always producing great art. On tonight’s showing, this is a statement that definitively applies to Jeffrey as well, you will rarely see a performer with such a low key singer-songwriter set up display so much range and versatility.

Playing with his latest backing band Los Bolts, they collide between soft, semi-spoken anti-folk and jangly electric rockers then stamp it all out with some out-and-out punk-ass onslaught (such as the infectious ‘WWPRD’, Jeffrey’s heartfelt tribute to the bravery and integrity of Pussy Riot). A prolific creator of DIY comic books too, at one point mid-gig he stands raised up high to jive us through the “history of communism” with the visual aid of his own illustrated booklet of the same name. Delve into this man’s work and you feel he must just always be switched on creatively. Even his closing solo piece seems fairly hot-off-the-press as an audience member is required to hold up hand written lyrics; it’s a hilarious ode to the internet’s all encompassing place in modern living set to the tune of the Velvet Underground’s ‘Heroin’. It also shows how Jeffery does have a very clear strength largely elusive to his idol; Lou Reed was never known for his ability to get a laugh out of a crowd!

There’s an emphasis on the wonderful new album ‘Manhattan’ but thanks to a now deep back catalogue, he can cherry pick from a rich trove of songs to deliver a consistently strong set. ‘Williamsburg Will Oldham Horror’ has the flow and dark humour of an old Dylan talking blues style piece, slipping into a nightmare scenario after Jeffrey wonders if he’s spotted the “Bonnie Prince Palace or whatever it is” singer on a train. Then he charms the pants off the locals with a song that reveals that the thing he likes best about England is, unexpectedly, the food. Jeffrey goes even further on his Anglophile trip by covering the superb ‘Too Many Questions’ by UK cult favourites the Wave Pictures (a band who played one of the other 2015 highlight gigs at the Portland as documented in an earlier review on Get To The Front).

As a writer, Jeffrey is perpetually exposing awkward home truths and first hand insight into the place in the culture he finds himself at the centre of. Vinyl fetishism and dedication to the intricacies of analogue sound are things that are important to Lewis but he’s aware enough to know that most people let go of these obsessions when they “throw that bullshit out and have a baby”.

‘Support Tours’ lays down with elegant wit the harsh economic realities of being “a working class musician with no funding in my country”, his resolve to make life on the road pay and some reflections from the other side of the fence as bands approach him for support slots. The push and pull of Jeffrey Lewis’ position is that a songwriter of his ability deserves to be a household name and yet playing at this level gives him accessibility and appropriate levels of intimacy. I once saw Lou Reed play to a half full Wembley Arena; in a club setting the gig would have been immense yet on that night it felt like an undignified defeat. Sad to say, as much as I would wish for Jeffrey every bit of success and financial stability he can gain, playing in places like tonight’s sold-out, 200 capacity Portland is what becomes an underground legend most. This man is always worth waiting for.