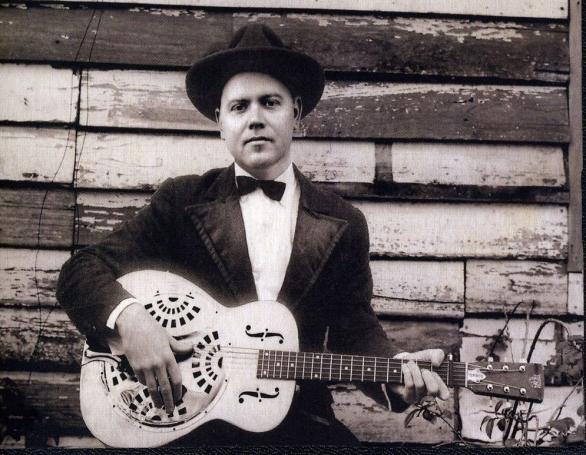 The Aussie Blues man is on stage at the Portland talking to his audience about the long journey towards his new material. It seems he’s suffered some writers’ block. “I couldn’t write any new songs for such a long time. This was in part down to my one self-imposed rule, no more jungle songs. I didn’t want to be talked about like I was that jungle guy. So anyway, here’s the song that I wrote that finally broke my drought. It’s called…’I’m A Jungle Man’”!

Boom! Boom! This is how Stoneking likes to play it. His set is a loose ramble through a fine back catalogue, peppered with some new songs and stylistically appropriate covers. His manner is so natural that the stagecraft gently eases its way in. Early on he’s quiet but by mid-set almost every song is set up by an entertaining pre-amble. Not just that, but these are very often even longer than the actual songs themselves. They’re hilarious as well; for example, a lengthy fantastical flight on the yodeller Jimmie Rodgers ends with the exquisitely timed throwaway “but that’s got nothing to do with this song!” I can’t help but draw a comparison to Tom Waits here, the raps and the strict maintenance of an on-stage character are all Waitsian in essence. Even the punch-drunk drawl has echoes of those early late-night Jazz bar scats that were as much a feature of the performance as the music.

It would be no surprise to me if C W Stoneking were to evolve in a similar vein over the coming years. He may well be studiously adhering to a thespian-like stagecraft but the music comes out of him as naturally as air. There are times tonight when he breaks off mid-song, either trying to remember the next lyric or an impending chord change. But rather than exposing a performer who is under-rehearsed it leaves the opposite effect, revealing a man who is so relaxed with his music and stage presence that he trusts his connection with this stuff to carry him through. And even if he is under-rehearsed, no one’s complaining.

The man’s ground level sound is born out of rootsy American Blues music of the early twentieth century. Consequently, he inevitably attracts a vintage clothing style of clientele to his gigs. Stoneking himself is rarely seen without his dapper suit, hat and bowtie. My only reservation about this scenario is that it can be a little stifling, a touch too devoted to era-specific detail that you’d worry that any nod to a music that evolved after 1940 would destroy the magic spell. But whilst he can switch from his own music to a cover of a song discovered in 1942 by Alan Lomax without any noticeable shift in vibe, he is in no danger of becoming an antique repro curiosity. For one, because a closer listen uncovers a multitude of nods to other genres (especially Calypso and some deliciously demented 50s Rock ‘n’ Roll riffing) and secondly because C W Stoneking is 100% legitimate and sincere in his delivery. He is an expert of the Blues without a doubt, but the music has enough open ends to really head off in any direction he fancies. Later on tonight he’s soliciting the audience to join in the dipey-dopey sing-a-long ‘The Zombie’. I’m unsure who’s leading who as the crowd seem to remember the lyrical sequence better than he does. But this man knows exactly what he’s doing, this crowd may be allowed to think they’re steering the ship but C W Stoneking has them, as I’m sure he does wherever he plays, in his neatly presented retro pocket all night long.