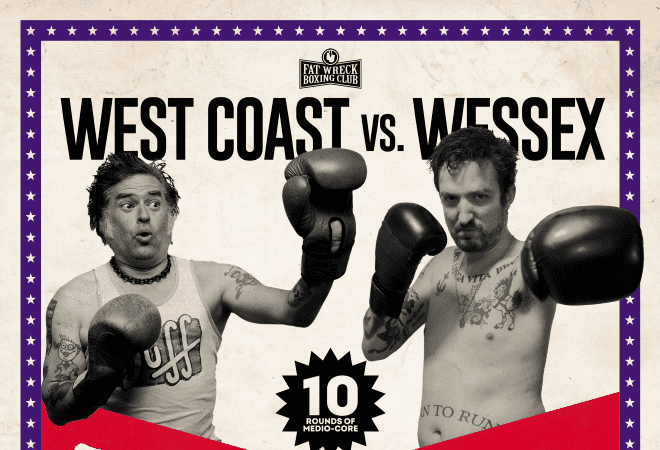 NOFX & Frank Turner have announced new split covers album ‘West Coast Vs. Wessex’, due out for release on 31 July 2020.

The LA punks and London-based singer are long-time friends and fans of each other’s music. For the project, NOFX have selected five tracks of Turner’s solo back catalogue with Frank returning the favour and recording five of his personal favourites from the band’s extensive 37-year-long-and-counting career. However, these covers aren’t simply double-time versions of each other’s music, with both parties taking the time to play and experiment with the possibilities of the songs presented.

Frontman Fat Mike admitting to channelling 90s NOFX for their interpretations and commented, “I listened to all his records, and I picked the ones that I thought I could make more interesting…What I did is change a lot of chords. Frank, he beats me in the singing department. So I can’t sing better than he can, but I can maybe throw in a melody here or there or chord that he hadn’t thought of.”

Turner discussed his choice of tracks saying, “I didn’t want to just do straight covers of anything. I wanted to try and pick songs where I felt like me and my band could bring something different to the table…But it did strike me that it would be cool to demonstrate to the casual NOFX fan, who doesn’t know who I am, that I am actually a fan. I didn’t just go to Spotify and pick the five most-listened-to songs.”

Turner and his band The Sleeping Soul recorded their songs between their rehearsal space and during tour commitments. NOFX recorded at Fat Mike’s Six Floggs studio, with production by the D-Composers.

Details of the ‘West Coast Vs. Wessex’ album arrives alongside the first two singles.

LISTEN TO ‘THATCHER F*CKED THE KIDS’ BY NOFX HERE:

Live shows in support of the new album are due to be announced soon.