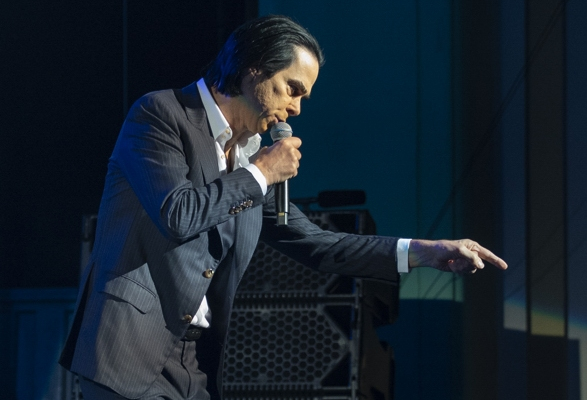 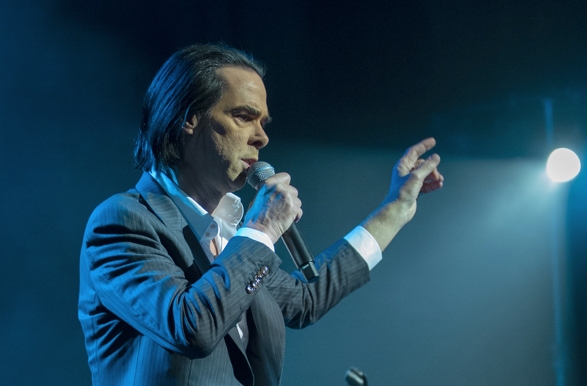 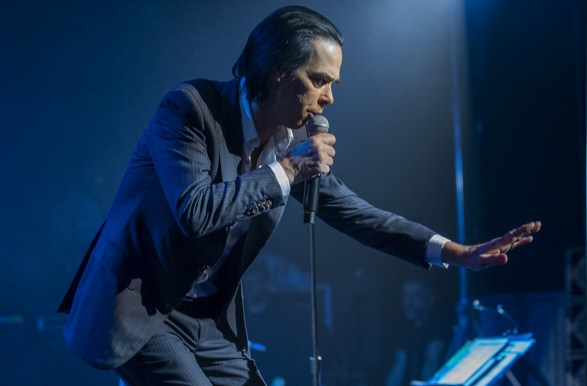 They say life is full of surprises. With the opening of the refurbished, spectacular Globe Theatre, it seems that we’ll have to start getting used to having world-class performers appearing on our doorstep, but seeing Nick Cave performing in the town is right up there with things I never thought I’d witness.

Cave, who recently turned 64, is touring with his long-time collaborator the Bad Seeds’ member Warren Ellis, and they were accompanied by multi-instrumentalist Johnny Hostile on drums, bass and keyboards and backing singers Wendi Rose, T Jae Cole and Janet Ramus. Their set was heavily biased towards this year’s ‘Carnage’ album and 2019’s ‘Ghosteen’ but also included some choice picks from the Bad Seeds’ back catalogue

‘Ghosteen’ and ‘Carnage’ have found Cave in a contemplative frame of mind, both heavily influenced by trying to come to terms with the death of his son Arthur in 2015. Both are visceral studies of despair, grief, hope and love but despite their at times overwhelming darkness they are masterpieces and just happen to be two of my favourite albums of recent times. The cancellation of the planned ‘Ghosteen’ tour by the Bad Seeds due to Covid meant the songs from both albums had not been performed in front of an audience until this tour.

Cave, wearing a dark suit with white shirt open to the mid chest cut an impressive, compelling figure. From the moment he walked on stage he had the audience enthralled. Lean, tall and angular, he stalked every inch of the stage during opening number ‘Spinning Song’, the first of three straight tracks from ‘Ghosteen’. Scanning the audience he seemed to be sizing us up pointing and gesturing as he sang of the “King of rock’n’roll” with “his black jelly hair he crashed onto a stage in… Stockton… on Tees”.

Moving to the piano for the sad, ghostly ‘Bright Horses’, Cave sang of “The little white shape dancing at the end of the hall / Is just a wish that time can’t dissolve at all”. It wasn’t the first time the spirit of his son would make an appearance in the lyrics, but it would take someone with a heart of stone not to feel a lump in their throat or a pricking in their eyes.

‘Carnage’ was followed by the magnificent ‘White Elephant’ on which Cave and Ellis not only raised the volume but the intensity too. The seated, magnificently bearded Ellis built up layers of sound on his synth as Cave brutally tore into the spectre of white nationalism the world has witnessed on its TV screens these last few years. It was spellbinding to experience.

Mid-set found Cave at the piano for a trio of oldies. There was an emotional ‘I Need You’, where Cave himself seemed to be almost in tears as he sang “Nothing really matters when the one you love is gone” finishing with the refrain “Just breathe” which he repeated over and over, using the one breath as the words became shorter and shorter until they simply stopped altogether as his lungs finally emptied.

A gorgeous over of T.Rex’s ‘Cosmic Dancer’ had Ellis out of his seat adding dramatic flourishes of violin. He even had time to take a mid-song ovation while Cave smiled on, delaying the second verse while Ellis momentarily had the spotlight.

It was then back to the Bad Seeds’ material with ‘God Is in the House’ before Cave transformed into his full messianic preacher persona for the crazed maelstrom of ‘Hand of God’. To a backdrop of angry red lighting Ellis jerked away in his chair as if it was electrified while Cave, arms spread wide as he implored both audience and his singers undertook a knee drop to the stage that made me wince several rows back.

Returning to the piano Cave delivered an exquisite, haunting ‘Galleon Ship’ and ‘Leviathan’, before closing the main set with ‘Balcony Man’, which he dedicated to those in the circles. “I’m the balcony man / When everything is ordinary until it’s not” and “what doesn’t kill you / just makes you… crazier” are lyrics clearly influenced by the past eighteen months of pandemic.

There were two encores, a sprawling, epic ‘Hollywood’ and the murder ballad ‘Henry Lee’ which Cave originally recorded with his then partner PJ Harvey. Returning for a second time it was to perform a stark yet glorious ‘Into my Arms’ during which you could have heard a pin drop. It alone was worth the ticket price.

A shouted request for ‘Breathless’ brought a “Sure, we can do that” from Cave and had Ellis reaching for his flute. Cave thanked the audience for “Risking your lives and coming out to see us” before closing the performance with an emotional ‘Ghosteen Speaks’, in which again the figure of Arthur was prominent – “I am within you, you are within me / I am beside you, you are beside me”.

It had been an intense, spiritual performance from a mesmeric performer that ranged from melancholic to raging yet was ultimately jubilant. Of the many hundreds of shows I’ve seen across the years, I don’t believe I have ever seen a performer hold an audience spellbound and captivated in such a way. It was, quite simply, magnificent.