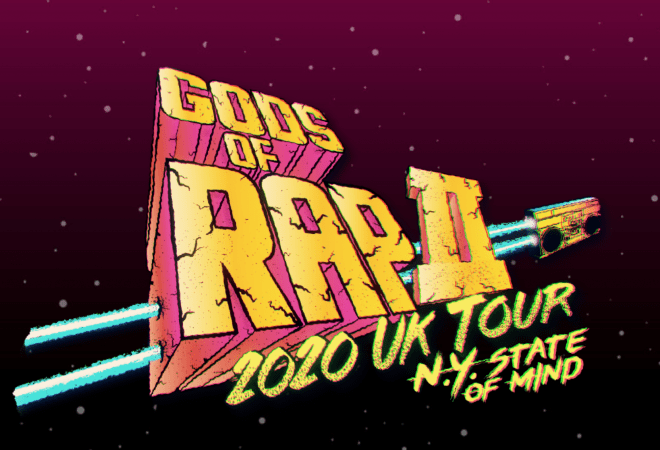 The Gods of Rap II tour has been cancelled – customers can obtain a refund from their point of purchase.

Hip-hop icon Nas has sold more than 20 million albums worldwide throughout his legendary career. One of the greatest MC’s of all time, he has taken home an incredible 13 Grammy Awards. His recent album The Lost Tapes 2 sees a compilation of selected unreleased tracks from his last four albums, including 2006s Hip-Hop is Dead, 2008s Untitled, 2012s Life is Good and 2018s Nasir.

DMX is set to make his highly-anticipated return to the UK after more than 15 years of absence! The legendary artist entered the world of rap back in the 90s with his debut studio album ‘It’s Dark and Hell Is Hot’, which dropped in 1998. He has since released seven studio albums, the most recent being 2012s Undisputed. His most iconic releases to date includine 1998s Flesh of My Flesh, Blood of My Blood and 1999s …And Then There Was X, both of which reached No.1 on the US Billboard 200 and have been certified platinum numerous times.

Fronted by Jadakiss, Sheek Louch and Styles P, The Lox have written and rapped on hits by the likes of Puff Daddy, the Notorious B.I.G., Mary J. Blige, and Mariah Carey. The New York-based rap trio’s debut album Money, Power & Respect went platinum in 1998 peaked at No.3 on the Billboard 200 chart and was ranked No.1 on Billboard’s Top R&B/Hip-hop Albums. Their follow-up records We Are The Streets, The Trinity EP and Filthy America… It’s Beautiful also all reached critical acclaim.

Gang Starr will be performing a very special Legacy set with a live band and a visual experience, paying tribute to original founding member Guru. The influential hip hop group have recently dropped their first album in 16 years, One of the Best Yet, produced entirely by DJ Premier with vocals from the one and only Guru.

Don’t miss this once in a lifetime chance to see rap royalty on tour together in the UK in 2020!