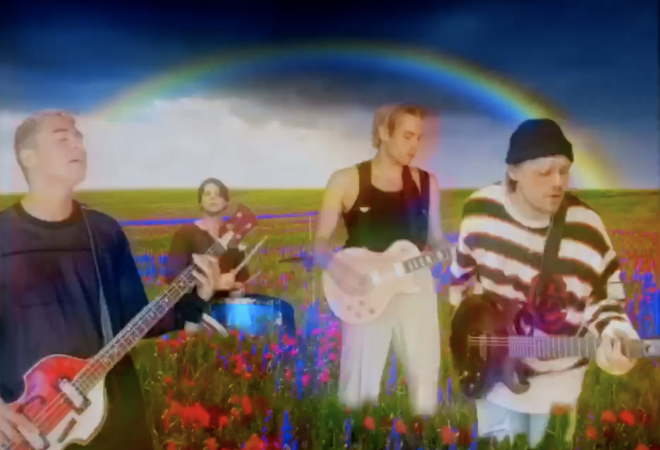 5 Seconds of Summer have shared the official music video for their latest single ‘Wildflower’, lifted from their latest No.1 album ‘Calm’.

The psychedelic visuals were recorded remotely by each member of the group as 5SOS quarantine separately in their own homes. Directed by Andy DeLuca alongside assistant director Sarah Eiseman, the video was shot entirely on green screen with added animated effects created especially for the band.

Calum Hood commented, “Wildflower was the wildcard of the album. A song that has opened new avenues for this band to explore. Most importantly it just feels good to listen to and disconnect for a minute. We really feel this video reflects that too and hope you all enjoy!”

‘Easier’ earned the 5SOS a spot on Billboard’s list of 100 Best Songs of 2019. 5SOS then joined forces with Tom Morello who solos on guitar for follow-up track ‘Teeth’, with the official music video garnering more than 36 million YouTube views.

Lead singer Luke Hemmings commented, “For a band to make it to four albums is no small feat in itself but to be reinventing and constantly pushing our songwriting and to come out with music that we’ve never been more proud of makes me so happy to be in 5 Seconds of Summer. CALM speaks on a journey through a young man’s life, for better or for worse. We are all human and all make mistakes, sometimes we hurt the ones we love and inevitably, ourselves in the process. CALM leaves the band in a much happier, unified and calm state of mind to continue making albums for years to come.”

5 Seconds of Summer has sold over 9.6 million equivalent album units and counting as well as over two million concert tickets worldwide, with streams of their songs now surpassing seven billion.