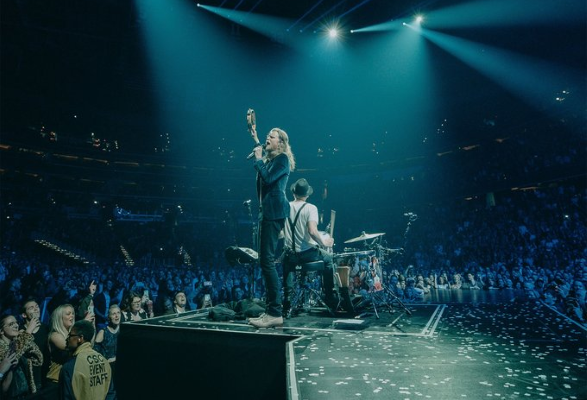 The Lumineers have confirmed that they will be returning to arenas across the UK & Ireland in February/March 2022.

The American band hailing from Denver, Colorado have also announced the release of their new live EP, recorded on the last night of their tour before pausing for lockdown.

‘Live From Last Night Of The Tour’ was recorded live in Milwaukee on 11 March 2020 and includes fan favourites ‘Ophelia’, ‘My Cell’, ‘Donna’ and ‘Gloria’ along with the heart-warming sounds of crowd appreciation and the audience singing along.

The band line-up includes founding members Wesley Schultz on lead vocals/guitar and Jeremiah Fraites on drums/percussion/piano. The pair have been recording together since 2005. Renowned for their energetic live shows, some of The Lumineers international hit singles include ‘Ho Hey’, ‘Stubborn Love’, ‘Ophelia’ and ‘Cleopatra’.

The folk rockers have released three albums to date. Their self-titled debut dropped back in 2012, peaking at No. 2 on the U.S Billboard charts and attaining certified triple Platinum status in the US and Platinum in the UK. Follow-up full-lengths ‘Cleopatra’ and ‘III’ reached No.1 and 2 in the Billboard album charts respectively and also achieved Platinum status. ‘Cleopatra’ was a No.1 album in the UK Top 40.

Be sure not to miss out on the chance to snap up tickets to see The Lumineers live on tour next year!