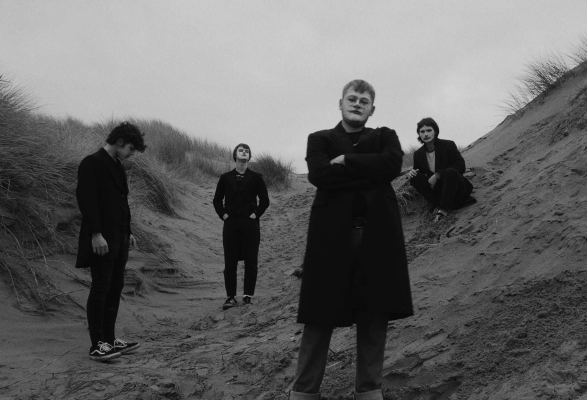 The Bowie, Joker and A Clockwork Orange inspired monochrome widescreen visuals see the band head to the beach with interspersed footage of their livestream gig at Blackpool’s Tower Ballroom in November.

‘Foolish Parley’ originally appeared on the band’s ‘Ghosts’ EP in October and is an essential cut from their 2020 soundtrack. Discussing the song frontman and lyricist Alex Moore commented, “Being honest, this just came to me out of nowhere, I can’t pinpoint from exactly where or why. Like a lot of songs, it was something that flowed freely, working first time and, sometimes, it takes no more thinking about than that.”

Last year the indie four-piece was honoured with a place on the BBC Sound Of 2021 longlist, appeared on Later… With Jools Holland as well as enjoyed a week-long BBC Radio One residency on the BBC Introducing Playlist.

The Lathums also made their first impression on the UK Album Charts, reaching No.14 for their vinyl-only EP compilation ‘The Memories We Make’ and snapping up the top spot in the UK Vinyl Chart later in the year with ‘All My Life’, their debut single for major label Island.

This year the Wigan group have lined-up a series of UK & Ireland shows and festival appearances as well as their first ever European dates.

The band consists of Alex Moore on vocals/guitar, Scott Concepcion on lead guitars/vocals, Johnny Cunliffe on bass and Ryan Durrans on drums/vocals.