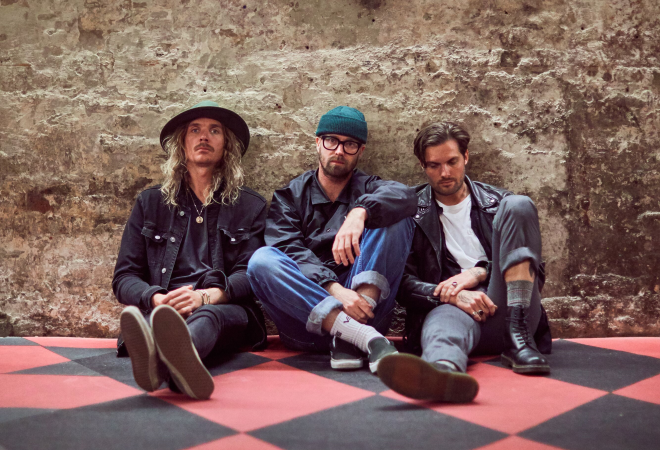 Fresh off the back of their sold-out run of UK intimate underplay shows in June, Sunset Sons have announced their highly-anticipated second album ‘Blood Rush Déjà Vu’.

The album is due out for release on 01 November 2019 and will be the follow-up to their UK Top 30 debut ‘Very Rarely Say Die’.

‘Blood Rush Déjà Vu’ was produced by Grammy Award-winning MPG Producer Of The Year, frequent collaborator and unofficial fourth member Catherine Marks, who previously worked with the trio on their ‘The River’ EP, which has clocked up over two million streams to date.

CHECK OUT THE VIDEO FOR NEW SINGLE ‘SAY HI’ HERE:

The British-Australian indie-rockers recently received an AIM nomination for ‘Best Live Act’. In addition to playing over 250 live shows, they have toured with the likes of Nothing But Thieves, Imagine Dragons as well as sold out headline gigs at popular London venues like Shepherd’s Bush Empire and KOKO.

The Sunset Sons have also confirmed that they’ll be hitting the road on a UK tour in support of the new album this November, with dates scheduled in Bristol, Falmouth, Glasgow, Newcastle, Manchester, Birmingham and London. Tickets on sale Friday (16 August) at 10am from Gigantic Ticketmaster Ticketweb See Tickets