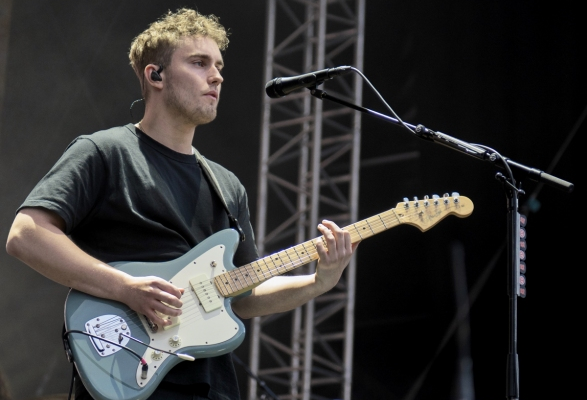 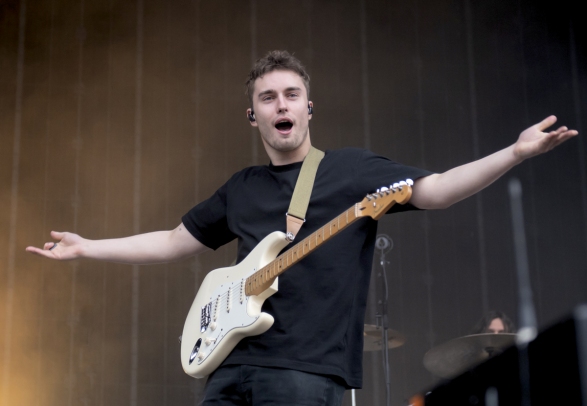 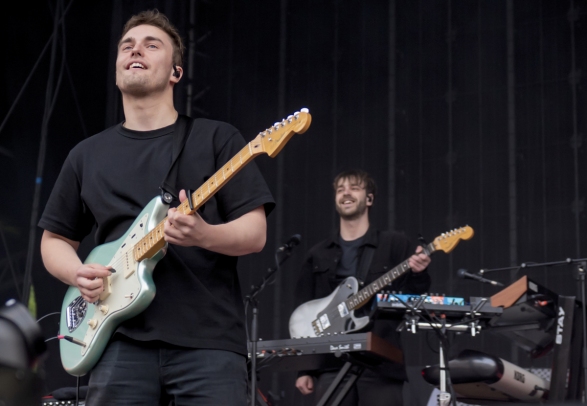 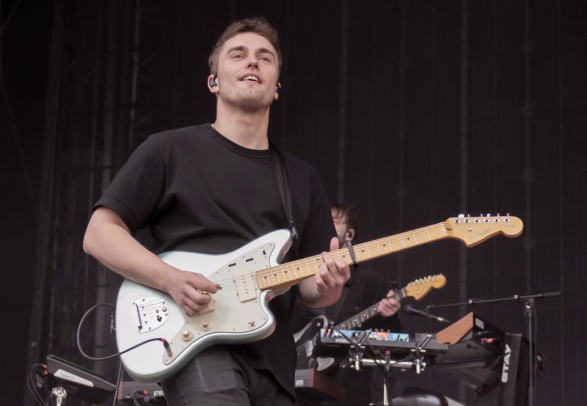 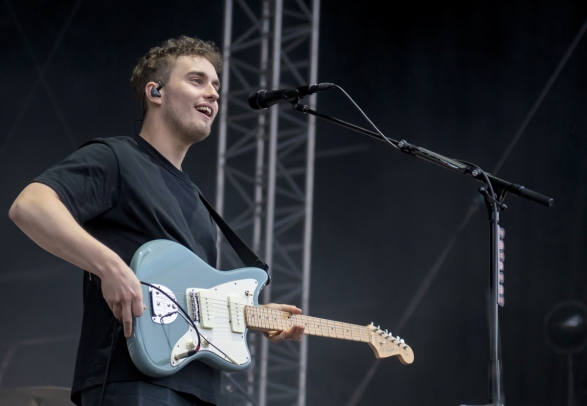 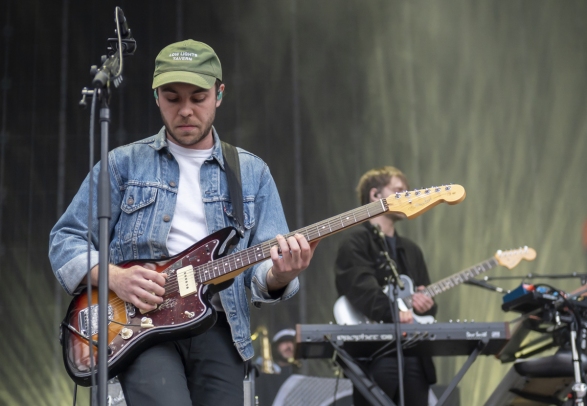 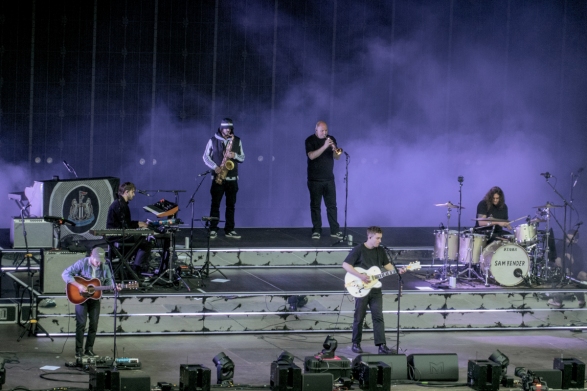 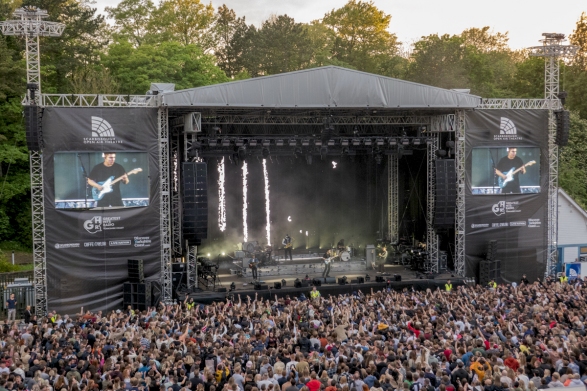 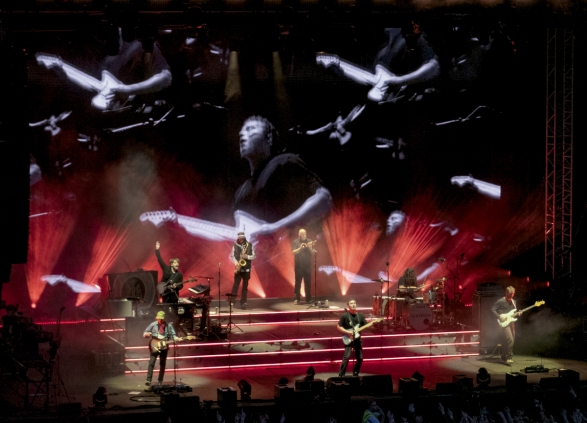 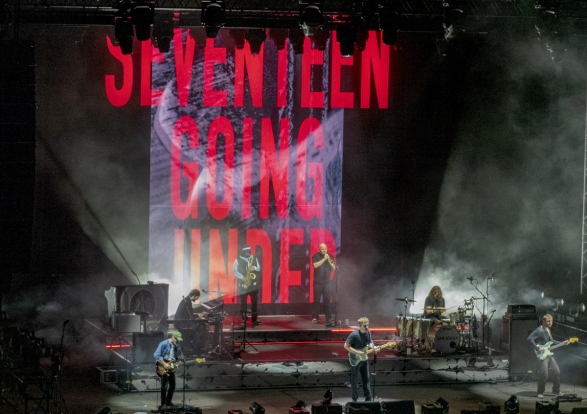 After attending Sam Fender’s Leeds Arena show last November, I expressed a hope that he might get booked for this summer’s run of shows at Scarborough Open Air Theatre. I was therefore delighted to learn that not only was he booked, but that he was to open the season last Friday. It will come as no surprise to learn that the talented Geordie did it in style, delighting a sold-out, highly enthusiastic audience.

Last week he played a gig in his hometown at Newcastle City Hall that raised in excess of £133,000 for the North East Homeless charity of which he is a patron. And, also last week, the Rolling Stones added him to their bill in Hyde Park this summer. In short, he’s big and destined to be even bigger.

After a pleasant opening set by Heidi Curtis, Fender and his talented band opened with lively versions of ‘Will We Talk?’ and ‘Getting Started’, two catchy tunes that succeeded in taking the chill off the seaside crowd as they leapt around with abandon. “As soon as we got here, I knew this was going to be a good one”, Fender told the delighted crowd.

A slower section featuring ‘Mantra’, ‘Better of Me’ and ‘Dead Boys’ showcased the band’s wider musicality with various band members allowed to shine with their contributions.

Key to this sound, of course, is saxophone player Johnny “Blue Hat” Davis, as ever with Newcastle shirt on his back and bucket hat pulled low on his head. His fluent playing bring songs like ‘The Borders’ and ‘Get You Down’ to life, helping reinforce their themes of insecurity, bitterness or anger.

The energy of ‘Spice’ and ‘Howden Aldi Death Queue’ turned the fervour up to eleven as a couple of mosh pits started, but my ageing bones were quite happy witnessing the carnage from the sanctuary of the tiered seating.

‘Spit of You’, ‘Play God’ and a wonderful ‘The Dying Light’ – the latter with Fender partially at the piano – was a terrific way to finish the main set, but the encore was something else. Had there been a roof it would have been blown off in glorious fashion. An extended version of ‘Saturday’, followed by ‘Seventeen Going Under’ and the song that kicked his career off, ‘Hypersonic Missiles’ left the crowd in wide-eyed, sweaty ecstasy.

With an ambitious seventeen concerts announced so far, this season’s offerings represent a great coup for the area with something for everyone from Ru Paul’s Drag Race, Jane McDonald’s Platinum Jubilee Concert, and Michael Ball & Alfie Boe; homegrown stars like Tears for Fears, Simply Red, Lewis Capaldi and Tom Jones; and global superstars like a-ha, Crowded House, Frankie Valli and the Four Seasons, Bryan Adams and Christine Aguilera. Visit scarboroughopenairtheatre.com for details of who, when and how to buy tickets.