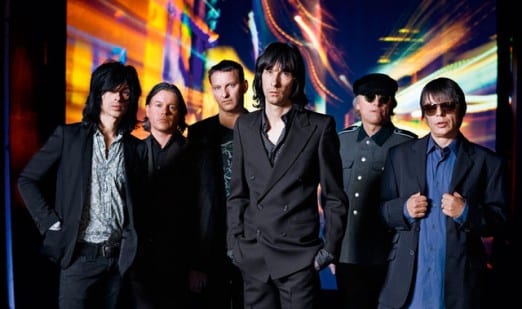 What a treat this has been! Possibly due to the complications that arose around re-scheduling their tour after singer Bobby Gillespie took a fall from the stage at a Swiss festival in June, Primal Scream have landed in Cambridge at the 800 capacity gig-pen The Junction. It’s no wonder this one sold out within an hour of the tickets going on sale, other shows on the UK tour, including the London Brixton Academy, are far more on the scale you’d expect a band of this stature to play. That said though, this is a group of mostly seasoned veteran performers and they’re adept at measuring their set according to the needs of the room they’re playing to. So I’m delighted to report that tonight, this little corner of Cambridge got its rocks off!

For Bobby Gillespie the night appeared to have a personal resonance. He’s not the first record collecting music nut to travel to Cambridge with Syd Barrett on his mind. Many fans travel to the area to pay homage to the original psychedelic visionary whose britcentric songwriting and acid guitar excursions on that classic Pink Floyd debut album haven’t aged a bit. It was only just over ten years ago that people would frequently report sightings of the reclusive Barrett as he pottered about the city lost in his own private world. Gillespie too seems lost in his own private reverie tonight, I’d put money on some ‘Interstellar Overdrive’ getting a play on the tour bus after a gig where the cosmic ‘Higher Than The Sun’ is dedicated to the late great Syd. “Where are you vegetable man?” Bobby cries out at the start, later in the set he even drops some lyrics to ‘Dark Globe’ into the mix. But then it’s put more succinctly when he offers “no Syd Barrett, no Primal Scream”.

As revealing as that insight may be, it doesn’t tell the whole story of how Primal Scream totally smashed this tonight. The current Scream team still has long term members Andrew Innes and Martin Duffy in the ranks, but without a monster of a presence in the line up like Mani or the sadly missed Throb, the focus settles on the front man. Gillespie is a master at this duty with some thirty years fine honing behind him. He’s barely been on stage thirty seconds before he starts geeing up the audience. “You can make some noise you know” he’s goading everyone ahead of the negotiation being indisputably sewn up by the band opening with a sensational ‘Moving On Up’. The message seems clear, give the band some love and they’ll deliver the goods with an arsenal of songs that can raise the stakes a notch at every turn.

Current album ‘Chaosmosis’ was released way back in March and this no longer feels like a tour in promotion of a new record. If you’ve got a back catalogue of the consistent high standard that Primal Scream can offer you’d be mad not to dive into it and tonight the intimacy of the gig seems to plug the group into the desires of the crowd. I’ve seen Primal Scream many times in the past but this was by far the most compact and engaged I’ve witnessed them. Lucky us, for we’ve all just been treated to a set that scaled the game changing heights of indie-dance crossover classics like ‘Loaded’, ‘Swastika Eyes’ and an oh-so wonderful revival of the original pre-remix version of ‘Come Together’. And a mere taster of newer tunes left plenty of room for the down and dirty Stonesy rockers like ‘Country Girl’ and ‘Rocks’. Wined and dined indeed!