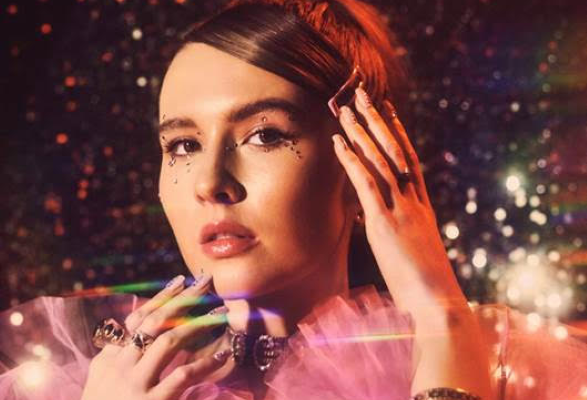 The accompanying visual for the ballad is directed by Elliot Simpson and stars the UK pop songstress, who reconnects with an old flame at a wedding where everything appears to go wrong.

Mimi commented, “I think we’ve all had ‘dumb love’ at some point! You fall crazy head over heels for someone, and it’s all about that fresh new love feeling you get. That ‘is this actually real’ feeling & sometimes, it’s the most real, because ‘dumb love’ really never ends.”

The Canterbury-born star first started writing songs at 13-years-old. After enrolling at The BRIT School, she eventually left home to attend the prestigious BIMM [British Institute of Modern Music]. In 2019, she uploaded a handful of early compositions and collaborations online, landed management, and signed a deal with Epic Records (RCA in the UK).

During a New York City dinner with friend and social media star/dancer Charli D’Amelio, Mimi’s impromptu acapella (in the restaurant) exploded with over 20 million views on TikTok, paving the way for a string of songs like ‘Before I Go’, ‘I’ll Break My Heart Again’, ‘Reasons’ and hugely successful single ‘Good Without. The track has recently gone silver and spent an impressive 10 weeks in the UK Top 20 – including two in the Top 10.

With over 116 million total streams under her belt and widespread worldwide critical acclaim, fans can expect plenty more to come from the rising artist, who is currently putting the finishing touches on her forthcoming debut EP, due out sometime this year.

Mimi Webb has also announced her first ever UK headline tour for autumn 2021 – full details below: