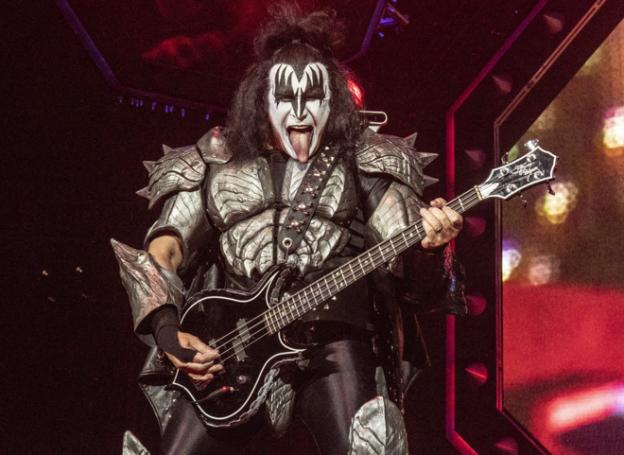 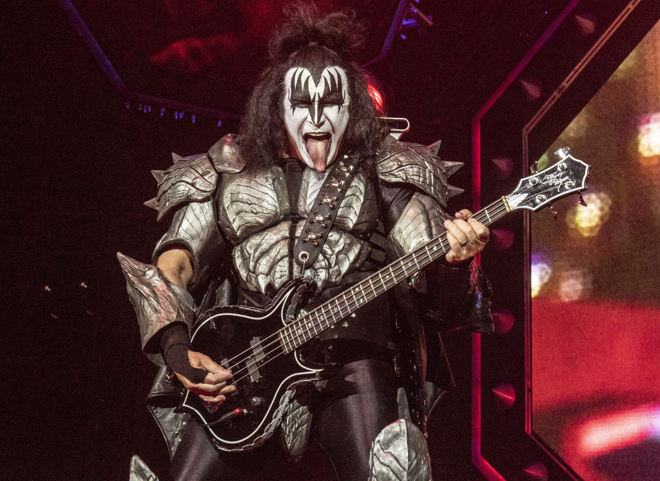 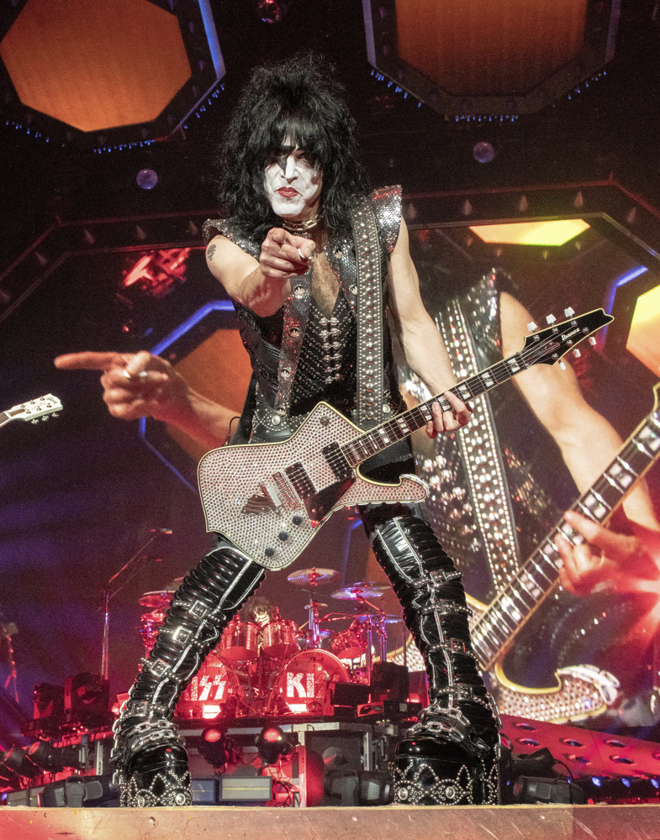 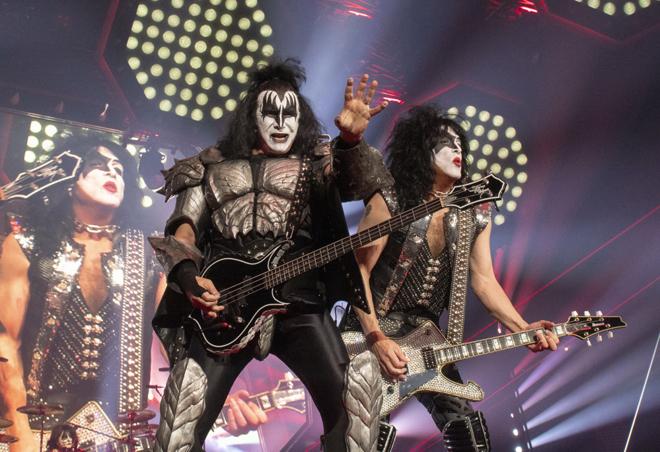 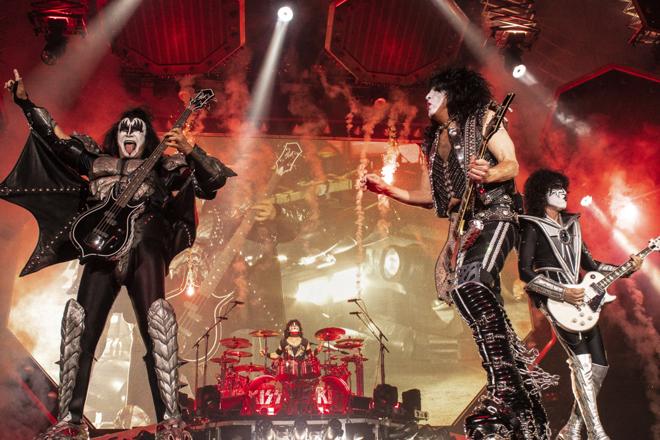 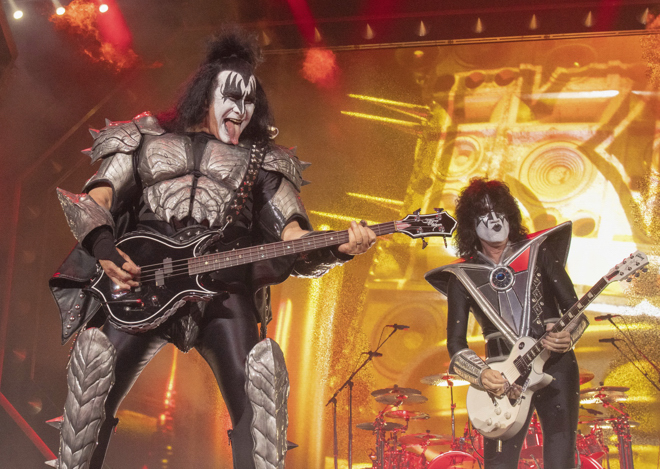 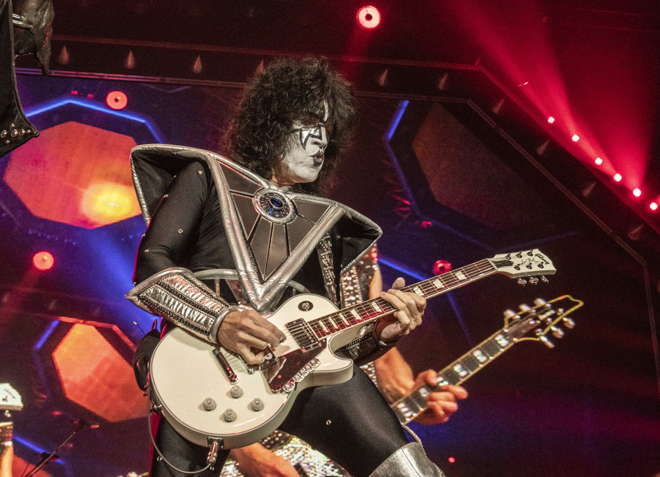 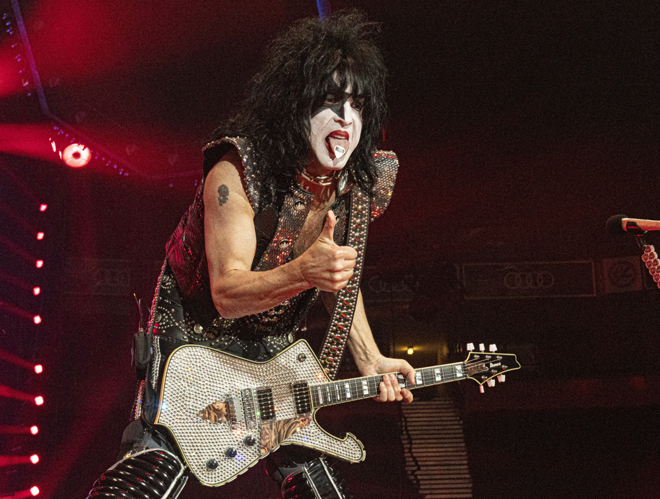 Kiss deliver a crazy, crazy night as they say farewell to Manchester… 5/5

Having been thwarted on their last scheduled appearance in Manchester which had to be cancelled after the Arena bombing, Kiss returned with a vengeance last Friday. For a band often criticised for their skill in parting fans from their money, it’s worth remembering that they raised around £300,000 from auctioning guitars with the money going to the Royal Manchester Children’s Hospital where victims of the bomb were treated.

On this return visit they brought the fully monty. Fireworks, flames (lots of flames), fire, lasers, blood, balloons, confetti cannons, a zip wire and a truly dazzling light and video show that included eleven huge octagonal video screens above the band that must have put the local grid under severe strain. In short, a typical Kiss concert but turned all the way up to eleven.

As Led Zeppelin’s ‘Rock and Roll’ blasted over the PA, the camera followed the band determinedly stalking down the corridor towards the stage. They resembled a bunch of Marvel heroes on their way to dispense some justice. A voice boomed, “Alright Manchester, you wanted the best, you got the best. The hottest band in the world: KISS.” The curtain dropped to reveal Gene Simmons (bass), Paul Stanley and Tommy Thayer (rhythm and lead guitars) descending to the stage on three of the video screens while what looked like Armageddon blasted away all around them.

Drummer Eric Singer was already at stage level, presumably, I thought, because even Kiss and their legendary road crew had not yet found a way to lower him and his massive kit from the arena roof in synchrony with the other band members. In fact the reason why was revealed later in the set when a huge riser lifted him from the stage above the others.

Billed as the End of The Road tour, this was a chance for band and fans to say farewell to each other, as the band are calling a day on touring and this is likely to be the last time the Kiss experience visits these shores. I say likely but lest we forget, they played a farewell tour back in 2000 so who knows? The Manchester crowd played safe, taking them at their word, and came out in force to witness what is unquestionably the biggest spectacle in rock. No audience gets more into a show than the Kiss Army, and it was noticeable how many school age youngsters attended, many in full band make up seeing the band for the first time.

Opening with ‘Detroit Rock City’ and ‘Shout it out Loud’ the craziness never stopped until the final notes of ‘Rock and Roll All Nite’ two hours later. Crowd favourites like ‘I Love It Loud’, ‘Calling Dr Love’, ‘Deuce’ and ‘Heaven’s Fire’ had the audience head banging, punching the air and thrashing imaginary guitars. Each band member was constantly up to some trick or theatrical gesture such as Stanley playing his guitar between his legs or behind his head, or simply posing for photographs with a pick on his tongue. It was often hard to know who to watch for fear of missing something elsewhere.

During ‘God of Thunder’ Simmons played a bass resembling an executioner’s axe and vomited blood before ascending to the arena roof on his platform. He later breathed fire during ‘War Machine’ and regularly showcased the longest tongue in rock, most noticeably during ‘Lick It Up’.

Thayer who replaced original member Ace Frehley as the Spaceman character back in 2002 is a terrific guitarist coming to the fore during ‘Cold Gin’ as he coolly shredded away on his Flying V as Simmons lasciviously leered and flicked his tongue close to his face. Singer showed his stick twirling skills during ‘Oh Yeah’ and his stick using skills during his elevated solo in ‘100,000 Years’ and provided the more melodic vocals if the evening, notably on ‘Beth’.

To be honest, no amount of on-stage antics or pyrotechnics can disguise the fact that some songs are forgettable, despite the tremendous spectacle surrounding them – take the ‘Psycho Circus’ for example – but they more than redeemed themselves when they delivered the motherlode towards the end of the show. When Stanley zip-wired over the audience’s heads to a platform constructed in the middle of the arena floor for ‘Love Gun’ and ‘I Was Made for Lovin’ You’ while laser beams skittered around him the show seemed to reach another level. The power ballad ‘Black Diamond’ ended the main set, with drummer Singer on a riser that took him towering above the stage as he played before lowering as the band finished the song.

The encores began with the ballad ‘Beth’ which Singer performed solo on a silver piano that had risen from under the stage before ‘Crazy Crazy Nights’ and ‘Rock and Roll All Nite’ proved a finale of truly epic proportions. The latter included the stunning sight of Simmons and Thayer on two precarious looking platforms attached to lighting rigs that swung the pair into and above the audience before delivering them back to the stage.

By the time Stanley smashed his guitar at the song’s climax the arena was so full of confetti, streamers, smoke and flames that I can only assume the arena’s health and safety officer was incapacitated, perhaps tied up in the basement somewhere.

The best band in the world? Well no, obviously, but the most spectacular and bat-shit-crazy enjoyable? Hell, yes. If this genuinely was their last visit here, they went out on the biggest high possible. If you have shares in a company manufacturing pyros might I suggest you prepare for a downturn once the tour finishes?