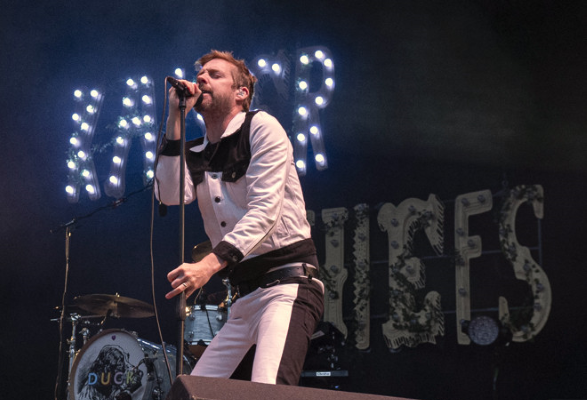 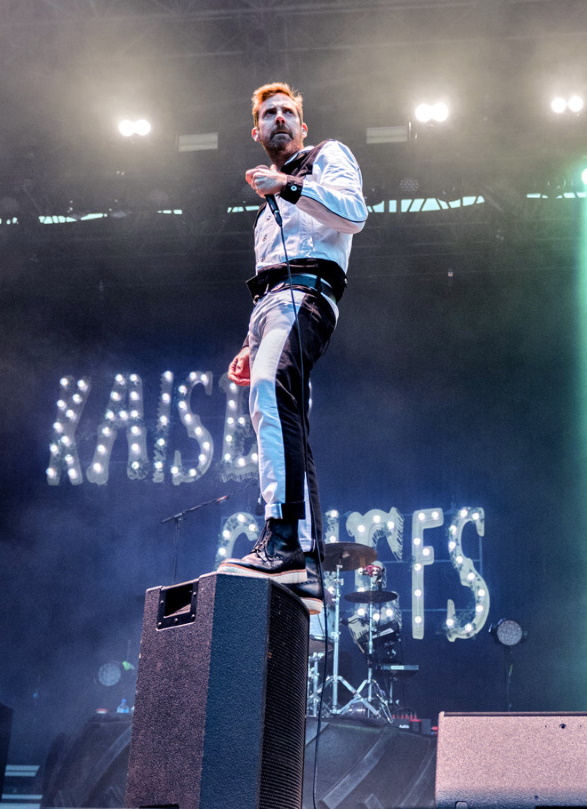 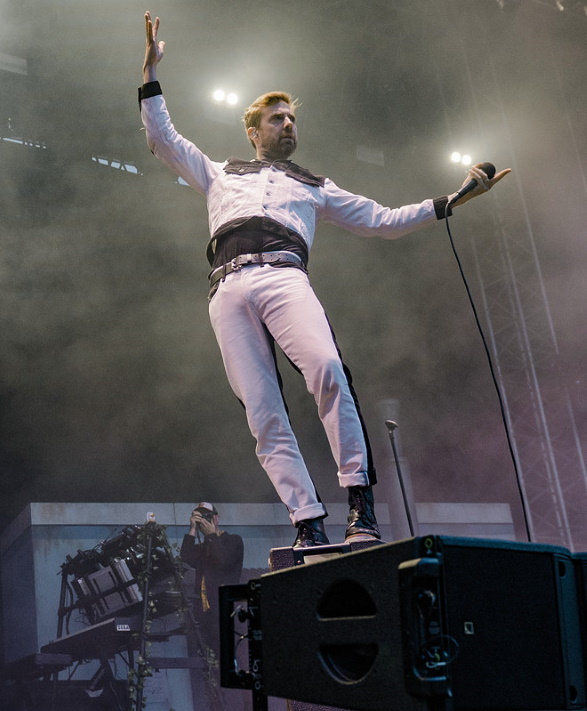 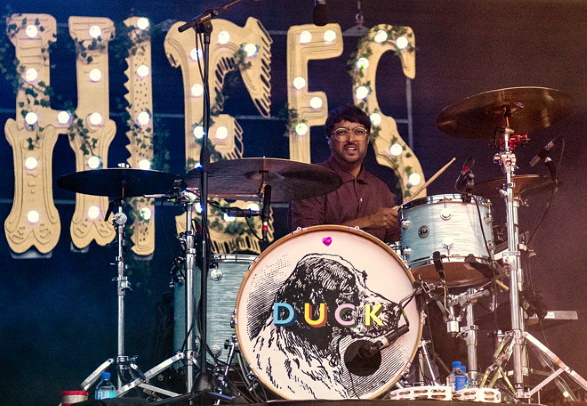 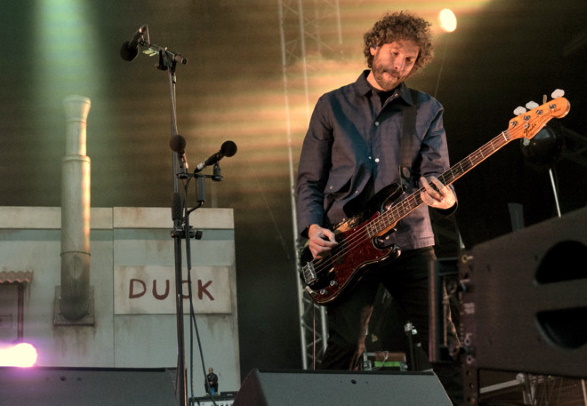 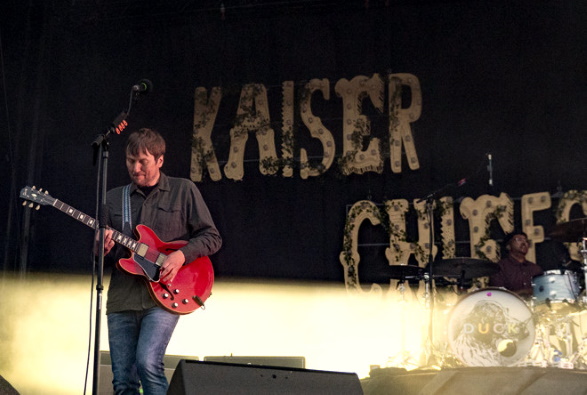 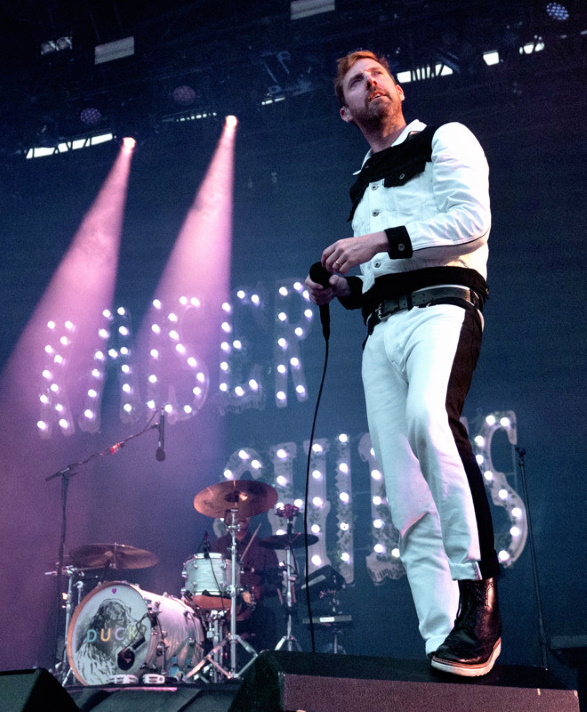 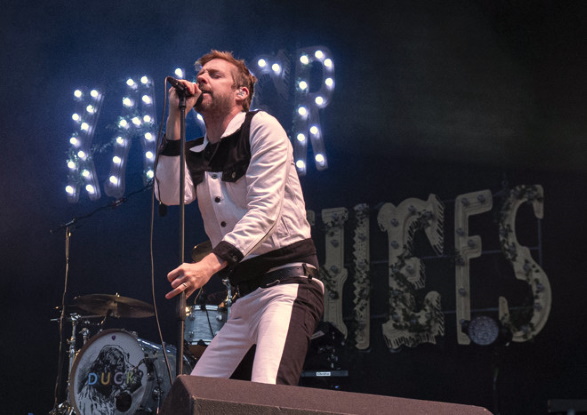 Scarborough Open Air Theatre’s second show of the summer saw the Kaiser Chiefs returning to the scene of their memorable high-octane appearance in 2017. Music starved fans had descended upon the town from as far afield as Manchester, Birmingham and Newcastle to get their fix and the band did not disappoint.

Incredibly, it has been seventeen years since the Leeds based rockers first made the charts with their singles ‘Oh My God’ and ‘I Predict a Riot’ and they have since racked up seven studio albums – their latest being ‘Duck’ – while singer Ricky Wilson has carved himself a TV career including a spell as a coach on the Voice UK.

Last Sunday, they rattled through an eighty minute set demonstrating they still have the moves and the tunes to deliver a crowd pleasing performance easily capable of lifting the gloom of a murky evening by the coast.

The moves were provided by Wilson, still one of the most exuberant frontmen around as he prowled the stage relentlessly, leaping on, off and over stage monitors, throwing mic stands in the air and clambering around the stage scaffolding.

The tunes were firmly in the crowd pleasing category. Taking the stage to a backing track of Dire Straits ‘Money for Nothing’, the band opened with boisterous renditions of ‘Never Miss a Beat’ and ‘Na Na Na Na Naa’ the latter still a strong contender for worst song title since The Police’s ‘De Do Do Do, De Da Da Da’.

Songs like ‘Factory Gates’ and ‘People Know How To Love One Another’ are worthy enough (Wilson even forgot the words in the latter – well it’s been a while away for all of us) but with the Kaiser Chiefs it’s the songs with the choruses that beg for crowd participation that raise the temperature and get the audience most excited.

‘Everything Is Average Nowadays’ and ‘Everyday I Love You Less and Less’ were good examples while the opening riff of ‘Ruby’ provided everyone with the opportunity to add their backing vocals to Wilson’s lead. Following up ‘Ruby’ with ‘Modern Way’ and ‘I Predict a Riot’ provided a three song section that was the show’s undoubted high point.

An extended run through ‘Angry Mob’ was followed by a surprising and excellent cover of The Who’s ‘Pinball Wizard’ which brought the main set to a close. Returning to the stage the band wrapped up their set with an encore that included ‘Record Collection’, ‘Hole In My Soul’ and ‘Oh My God’.

Proud Yorkshire lads Apollo Junction opened the evening with a short but spirited set of tunes from their debut album ‘Mystery’ and their upcoming release ‘All In’. They have a quite a following and are gathering plenty of radio airplay and seem to be a band worth watching out for.

Next Saturday it is the turn of Boy George and Culture Club to take to the Scarborough stage which will then remain busy with a host of great acts until mid-September when Duran Duran close the 2021 season.