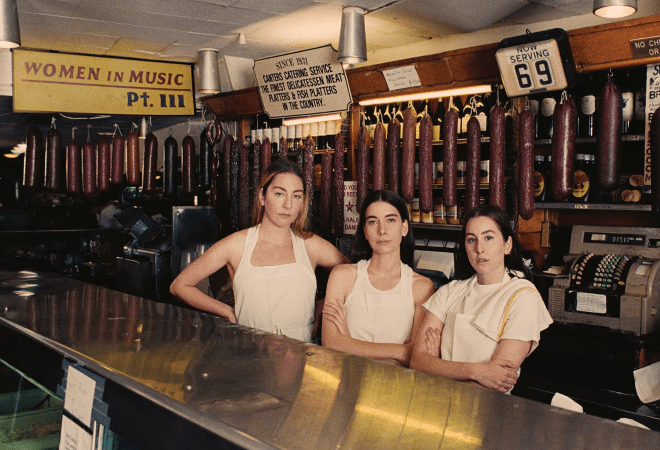 The LA sister trio have also shared accompanying visuals for the track, inspired by the band’s feelings of loneliness after coming home from tour. The video was directed remotely by Jake Schreier with Haim performing some seriously precise dance moves, which they co-choreographed alongside Francis Farewell Starlite.

The Grammy nominated band commented, “’I Know Alone’ was always going to be the next song we released, but it feels eerily appropriate given what’s going on in the world right now. We hope this song keeps you company.”

Discussing the album’s new release date, they continued, “Now that we’re all starting to settle into our new normal, it feels like a more appropriate time for us to release this body of work. We’re so excited to announce that our new album will now be released on June 26.”

‘Women In Music Pt. III’ was co-produced by Danielle Haim and long-time collaborators Rostam Batmanglij and Grammy Award-winning producer Ariel Rechtshaid. The new album, which was originally scheduled to drop on 24 April, will also feature previously released songs ‘The Steps’, ‘Hallelujah,’ ‘Now I’m In It,’ and ‘Summer Girl’.

Haim’s sophomore album ‘Something To Tell You’ came out in July 2017 and was the follow-up to 2013’s ‘Days Are Gone’. Debuting at No.2 on the UK Album Charts and No.7 on the Billboard 200, it featured hit singles ‘Little of Your Love’ and ‘Want You Back’.