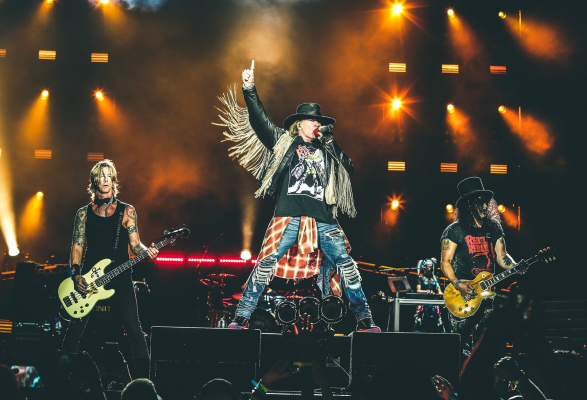 The band shared an official statement along with the new dates saying, “Hey Gunners, unfortunately we need to ask for your patience one more time. Our summer European tour dates will be rescheduled to 2022, but with the added bonus of new shows and special guest Gary Clark Jr! The tour kicks off in Lisbon, Portugal on June 4th, 2022, with new dates in Norway, Czech Republic, Poland, Netherlands, and Italy. Tickets remain valid for all rescheduled dates, so please do hold onto them. We continue to be thankful for your understanding and support during these unprecedented times. Light is at the end of the tunnel and we are looking forward to getting back on stage later this year in the USA, Australia, New Zealand and next year in Europe and more!”

The legendary rockers first formed back in 1985, injecting their unrivalled sound into the LA rock scene.

They dropped their debut album ‘Appetite For Destruction’ in 1987, which went on to become the best-selling US debut ever, moving an incredible 30 million copies globally. In 1991, the seven-time platinum ‘Use Your Illusion I’ and ‘Use Your Illusion II’ occupied the top two spots of the Billboard Top 200 upon release. Over the last decade, they have performed sold out shows and headlined festivals worldwide, following the critically acclaimed release of their 2008 RIAA platinum-certified ‘Chinese Democracy’.

Six studio albums later, they are still one of the most important and influential acts in music history.