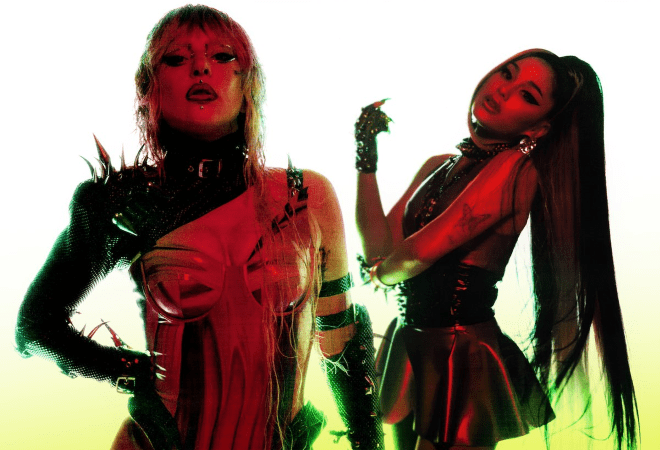 We’re looking back at some of the greatest girl power collabs and fiercest femal duets EVER. Is your favourite on the list? Read on to find out!

The pair’s iconic disco duet was one of the first and continues to inspire female artists to this day to join musical forces.

Aretha Franklin & Annie Lennox – Sisters Are Doin’ It For Themselves (1985)

The empowering female anthem featured on the Queen of Soul’s ‘Who’s Zoomin’ studio album and the Eurhythmics ‘Be Yourself Tonight’.

The two singing divas teamed up for the one-off classic duet that showcases their incredible vocal talents when it comes to hitting those high notes and performing perfect harmonies.

The R&B stars continue to hold record for longest-running No. 1 female duet, which first topped the US Billboard Hot 100 for 13 weeks back in 1998.

The song was recorded for the animated film The Prince Of Egypt and took home an Academy Award in 1999 for Best Song.

TLC star Lisa ‘Left Eye’ Lopes co-wrote and performed on the former Spice Girl’s hit single, which went on to reach the No.1 spot on the UK charts.

Dr Dre produced the collab for the US rapper and No Doubt singer – Eve would later return the favour by appearing on Gwen’s song ‘Rich Girl’ from her Love. Angel. Music. Baby. debut solo album.

Missy Elliott produced the new all-female version of the track for the movie ‘Moulin Rouge’. The song took home the Grammy for Best Pop Collaboration With Vocals.

The Grammy nominated track reunited Aguilera with ‘Lady Marmalade’ rapper Lil Kim and was the fourth single to be released from her sophomore album ‘Stripped’.

It is said that the track was not originally meant to be a duet and that Madge’s feature only came about after her infamous performance (and kiss!) with Britney at the 2003 MTV VMAs.

The Latin-flavoured track went to No.1 on the UK Singles Chart. In addition to earning a Grammy nomination, it also won the ‘Most Earth-Shattering Collab’ at the MTV VMAs.

This duet with Queen B cemented Mother Monster’s status in pop history and was accompanied by an epic nine-minute music video.

The track was the first single to be debuted from Grande’s second album ‘My Everything’ and also features rapper Big Sean, who provides the whispery vocals for the catchy chorus.

The track featured on Shakira’s self-titled tenth studio album and although it wasn’t a huge hit for either artist, the saucy music video sure made it a memorable one.

The Grammy nominated tune topped the UK charts and received an MTV Video Award nomination for Best Collaboration. Grande and Minaj collaborated again in 2016 on single ‘Side To Side’.

In the official music video for the track, the Aussie rapper pays homage to 90s teen blockbuster movie ‘Clueless’.

The mega single earned both artists their first US No. 1 hit on the Billboard Hot 100 chart.

Rain On Me went straight to the top of the UK charts in the biggest opening week of streams ever for a female collaboration. The song also debuted at the top of the US Billboard Hot 100 to become Gaga’s fifth and Grande’s fourth US No.1 single to date.