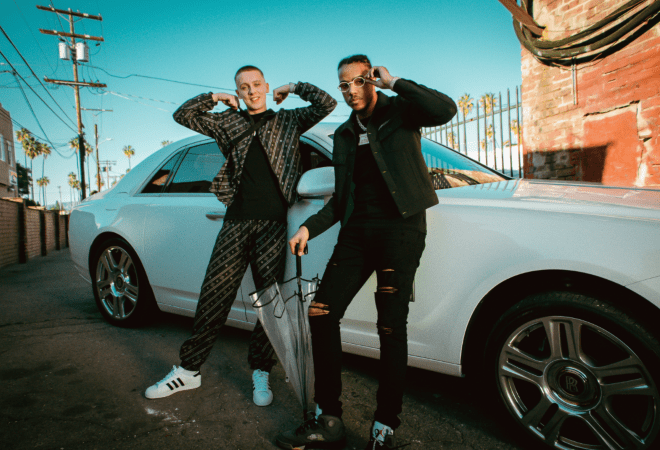 Aitch and AJ Tracey have teamed up for collaborative new track ‘Rain’, produced by Tay Keith.

After weeks of teasing the highly anticipated single, the pair premiered ‘Rain’ on BBC Radio 1 and 1XTRA as Annie Mac’s ‘Hottest Record In The World’ and DJ Target’s ‘Targo Embargo’.

The pair also shared the official music video, directed by Arrad and filmed in LA.

Two of the hottest names in UK rap, Aitch and AJ Tracey are both hot off the back of their 2020 Brit Awards nominations after dominating the charts with hits like ‘Taste’ and ‘Ladbroke Grove’.

Aitch recently dropped his first solo offering of 2020 ‘MICE’. The surprise release debuted on his website, which crashed shortly after due to the huge influx of traffic. The track has since been streamed over 2.5 million times as well as entered straight into the UK Top 40. The Manchester rapper is due to head back out on tour this year across Australia and New Zealand before hitting the summer festival stages.

AJ Tracey dropped his self-titled debut album last year to wide critical acclaimed. The release was one of the biggest indie albums of 2019 and charted at No.3 on the UK Official charts. The rapper sold-out London shows at the Brixton Academy as well as two nights at Alexandra Palace. His hit single ‘Ladbroke Grove’ is quickly nearing double-platinum status with over 1.1 million sales after spending 12 weeks in the Top 10 last summer.