Cardi B New Track ‘Please Me’ With Bruno Mars 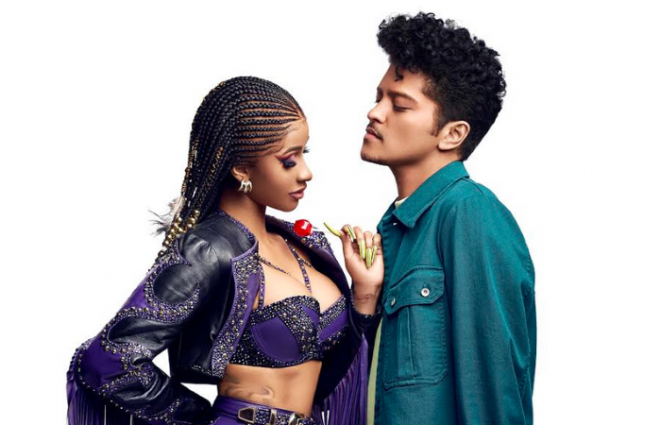 Cardi B has shared her first new track of 2019 ‘Please Me’ featuring Bruno Mars.

The sultry R&B slow jam dropped just days after Cardi took home the award for Best Rap Album at the Grammys for her chart-topping RIAA 2x Platinum certified Invasion Of Privacy. The Bronx rapper made history on the night when she became the first solo female artist in music history to win the prestigious category.

‘Please Me’ was produced by Bruno Mars and The Stereotypes. It is the second collaboration between the pair who first joined forces on the 3x Platinum hit remix of ‘Finesse’, with the music video alone garnering over 545 million views since its release back in January 2018.

LISTEN TO ‘PLEASE ME’ HERE:

Cardi received a number of other nominations at the 61st Annual Grammy Awards, including Record of the Year for ‘I Like It’, Album of the Year, Best Rap Performance for ‘Be Careful’ as well as ‘Best Pop Duo/Group Performance’ for her appearance on Maroon 5’s ‘Girls Like You’. She also performed her hit single ‘Money’ at the ceremony, with the official music video for the track now boasting over 48 million views.

Her award-winning album Invasion of Privacy has seen all 13 songs receive RIAA Gold certified status or higher. Some of the highlights include the 7x RIAA Platinum certified ‘Bodak Yellow’, the 5x Platinum ‘I Like It’ featuring Bad Bunny and J Balvin and the 2x Platinum ‘Bartier Cardi’.